The Framework is our compass

The 2020-2025 Cooperation Framework between the Government of Guatemala and the United Nations System continues to be presented throughout the country as the roadmap for the SDGs.

“The United Nations Strategic Cooperation Framework for Sustainable Development 2020 - 2025 is our compass that guides us to support the country in achieving the SDGs and leave no one behind,” says Rebeca Arias, the Resident Coordinator. “It is an interagency and multisectional effort to advance the 2030 Agenda, that is why we are taking it to different parts of the country, so that it is known,” she adds.

The Framework represents an agreement is the result of a construction process that involved two stages of workshops in which, in a participatory manner and based on the methodology of the theory of change, challenges, priority populations and desired changes were identified to determine the strategies to be implemented.

The Secretariat for Planning and Programming of the Presidency - SEGEPLAN - Keila Gramajo Vilchez, conceives it as “a working tool that contributes to the fulfillment of what is established in the National Development Plan: K'atun Our Guatemala 2032, in the Sustainable Development Goals and in the General Policy of Government 2020-2024. In addition, it was carried out within the framework of the readjustment of cooperation for the development of Guatemala, under the leadership of the President of the Republic Alejandro Giammattei, considering that the technical assistance is aimed at directly achieving the country's development".

This medium-term instrument was made in a constructive, open and participatory manner between the agencies that make up the United Nations System in Guatemala and the different public institutions of the government, it will be the guide for interventions in terms of cooperation of the different agencies of the system for the coming years. “The 20 UN agencies working in Guatemala, we believe that together we can achieve the goals of the 17 Sustainable Development Goals, in the decade remaining to 2030. That is the spirit of the Strategic Cooperation Framework, whose priority principle is: leave no one behind,” emphasizes Rebeca Arias Flores.

Presentation of the Cooperation Framework in Huehuetenango

The new 2020-2025 Cooperation Framework has five areas of work, which are linked to the themes covered by the pillars of the General Policy of Government 2020-2024, namely: economic and social development; security, peace and justice; sound institutions (transparent, accountable and effective); and environment.

On the day of the presentation, the Minister of Foreign Affairs of Guatemala, Ambassador Pedro Brolo Vila, said that “the activities and objectives set out in this Framework for the years 2020-2025, were built in close communication and coordination with the institutions of the Government of Guatemala, so we know that it is a route aimed at the most vulnerable population and their most immediate necessities.” The coordinator indicates that this fills them with satisfaction, because to the extent that this is in line with the Government's expectations of progress, it will allow the UN Country Team to provide better support for the goals of the 2030 Agenda.

The Framework is currently being presented in different cities to entities that participate in the Departmental Development Councils, civil society, the private sector and universities.

The coordinator feels satisfied with how the document has been received in the institutions and in different instances in the interior of the country. She firmly believes that the successful implementation and execution of this framework for the coming years is built with the clear objective of working for a better future for the children, youth, women and men of Guatemala. 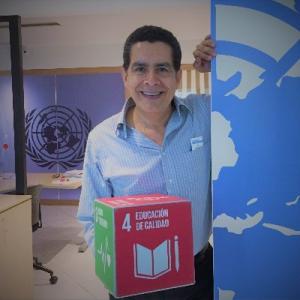